The Blessings of “The Fork in the Road”- ADHD vs ASD 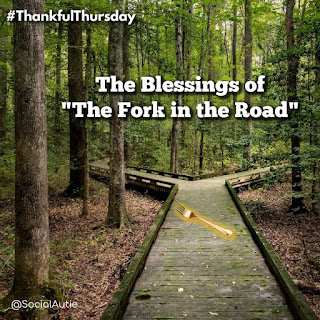 This week I  discussed ADHD vs ASD in a video on Tuesday as well as the role Eating, Alexithymia and Autism play in our daily lives and had a great conversation on the Talk Show with my friend Stephanie yesterday.

In each of these topics there was “A Fork in the Road” figuratively speaking.  And as I used that phrase in the photo above, I laughed because I could only visually imagine a literal fork in the road.  Maybe you did too. LOL.  (did you catch my joke in the image?)

I was identified as having ADHD in my 20’s after first  going through the horror show of a misdiagnosis of bi-polar and the awful things those medications did to my brain and body.

Finally, in my 39th year on this Earth, I was fortunate enough to be identified by a neuropsychologist as being Autistic.  This was a blessing and where the fork in the road appeared in my life

I originally thought I was JUST ADHD and that even though it didn’t explain everything, that was me.  Then NEW information about myself came into the picture and I discovered that I am Autistic.

I struggled with the idea of both being me.

I first thought, “OK ADHD was a misdiagnosis too and I am not ADHD but ASD.  Autism made so much sense and matched up to the places where ADHD didn’t.  HOWEVER, as I learned more about what Autism means in my life and to how my brain and body work, I was still left with areas where Autism didn’t answer the question of why or how I was.

I had to be open-minded and get into my science lab coat to resolve this new question, “What if I am BOTH ADHD and Autistic?”

The fork in the road came as I had to decide how I saw myself and how I was to go forward.

Until 2013, the dual and co-occurring diagnosis of having both ADHD and ASD was not permissible per the American Pediatric Association diagnostic guidelines.  This was information I was not aware of until very recently.  It explains why so many of us were identified first as ADHD and perhaps then later the addition of ASD rather than both earlier on.

I can also take the cultural biases into account for the times and see that a doctor was more apt to assign an ADHD label to a person more readily than one of ASD.  In the 1990s and on, the rise of ADHD identification rose tremendously, especially among young males in the United States in particular.  It became a normalized label within the social context and became “acceptable” as part of the mainstream, while Autism was not and sadly is still viewed as something other than what it truly is and what WE know it to be, a neuro-distinction, not a broken, defective, disordered or deficit model of a person, but just a person who thinks and perceives the world in a different way.

ADHD and Autism overlap in several areas that include:

-shared from @tfw-adhd with slight wording adaptations by me. 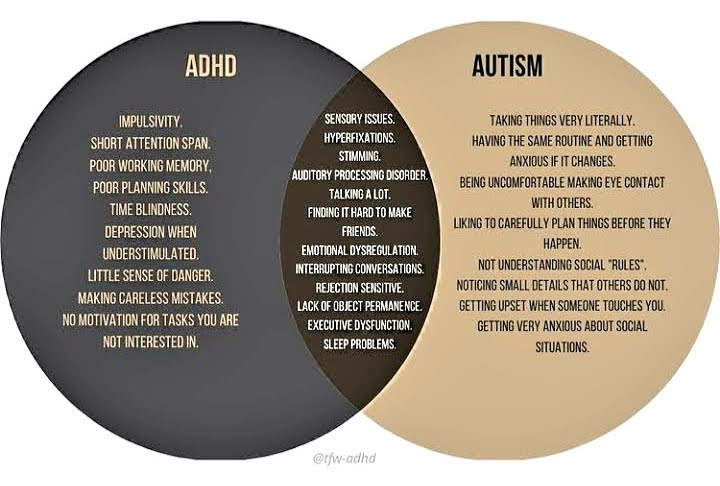 With all this being shared, I was left standing at the “Fork in the Road” where I felt I had to make a decision and choose one or the other.  My science brain kicked in and reminded me that I was thinking in a very narrow way and needed to step back and reframe my thinking.

Sure, I could choose to identify and understand myself with only one or the other but not both, OR I could take the more open-minded approach and combine and integrate the two.

The FORK has 4 tines in the modern world.  In earlier centuries the fork had only 2 tines.  I am speaking of the literal fork you use to eat food with here.  So the expression, “Fork in the Road” referred to a road that only split into two directions and you, the traveler, were only given the option to make the decision to go one of only two ways. Hence, “Fork in the road” refers to two options, two tines.

Here in the modern world, we have forks with 4 tines, tines are the pointy prongs that make up the fork.  We are not only given a choice of two options but many.

This was the blessing, this IS the blessing.  Yes, I am autistic and prone to black and white thinking.  I want facts and information without all the emotion, even though I am a very emotional person.  When it comes to making decisions I try to see the facts first and then I have learned to integrate the emotional factor before finalizing a decision.

Early in life, I was all about emotional decisions and my high speed brain wouldn’t slow down enough for me to make logical decisions, then somewhere along the line I flipped and disconnected from my emotions and tried making choices based on facts only.  Neither approach served me well.  It was in the blessing of integrating the knowledge of what ADHD and what Autism is to me, in my life, that I found balance and clarity.

As humans, we are a complexity of all things.  We are not simple humans.  Where perhaps in your life are you seeking to separate, divide, remove or negate a part of yourself because it doesn’t “fit” within a definition or a model that you currently know?

I encourage each person to take time to reflect on this and to find the blessings that come in the complexity of ourselves, to not feel that you can only have one or the other or that even the combination of the two is all there is. We are so much more than we realize.  You are so much MORE than perhaps you realize as well.

Popular posts from this blog

Trauma is NOT Linear for Autistics with Alexithymia

January 25, 2022
by Carole Jean Whittington, January 25, 2022 A large part of #lateidentifiedlife is recognizing and processing past trauma.  This is far from a linear process.  There is no direct path from A to Z. Throw alexithymia into the mix and you have a whole other experience on this trauma path.  The delayed realizations that hit you out of what feels like nowhere.  You have one conversation and one phrase or feeling unlocks a cascade of other past experiences and emotions you never noticed before.  All of a sudden past events come flooding in for you to make sense of and process. Days later you are beginning to notice that there were relationships and people who treated you very badly and who hurt you, but you did not realize it at the time.  You were in survival mode as an unidentified autistic.                             ______________________________________________________ Often the fear of rejection dominates our thoughts and we experience that emotional hurt as a deeply physical pain.
Post a Comment
Read more

If you are Autistic & ADHD waking up to a pile of dirty laundry SUCKS! Join me for a HACK to make this easier.

Did You Even Know You Had Been "Masking" for Decades? Autistic Masking and The Picture of Dorian Gray- Reflections on Similarities

February 12, 2021
Chances are your answer is no, just like mine was. In the novel, The Picture of Dorian Gray by Oscar Wilde, the main character, Dorian, lives two very different lives in physical reflection.  One life is his outer body which remains young and attractive, and the other is his portrait which ages and reflects all the external happenings instead of his actual outward appearance.  Dorian remains young and handsome on the outside, while his portrait does not. I don't compare this in the strictest sense, but rather as a way to convey how I perceive autistic masking and how it manifests in both the physical exterior and the internal worlds of an individual. I didn't even know what Autistic Masking was even after the first few years of knowing I was autistic.  It is a term that you learn and become familiar with after you get into the autistic community. The definition of "Social Masking" as it is discussed in the psychology and Autism world is: Masking  is a process in w
Post a Comment
Read more