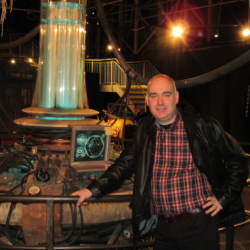 With hindsight and all the advances in neuroscience you might have already asked the question why wasn’t this picked up when I was younger? Well, it was and it wasn’t, in old fashioned parlance I could have been described as a ‘problem child’ and back then tragically the panacea for such ills was a jolly good hiding. Thank God we have moved on since then!

I realised very early on (around the age of five) that even though we are all different I certainly was more different than most and I certainly couldn’t understand why everyone else didn’t see the world like I did. I was well used to being described as odd, weird, peculiar etc. and there was one incident in my teenage years that summed this up. We were in a physics lesson (with thankfully a great teacher) and he was explaining the meaning of the word ‘anomaly’ and it went something like this:

Teacher: An anomaly is something that is in a group but not part of it because it is different. Let me explain: Take Muxworthy here (pointing at me – as so many people had done). He is an anomaly.

Teacher: Yes he is an anomaly. The only Timelord in a class of mere humans.

This was just one of the many hints (that I took decades to pick up on – autistics don’t do hints) that I was not like everyone else. For me as a long term Doctor Who fan that remains the high water mark of my time at school. Until I was diagnosed, I was forever waiting for a proverbial policebox to materialise and the occupant tell me it was time for me to go back to my home planet. This is also a common feeling for autistics.

In all those early years, I tried to like things everyone else did, but found it a real struggle acting as if I was interested in things I had no interest in. That was until I gave my life to Christ when I was 21 which also gave me a better reason for not doing things my peers enjoyed, phew! What I now endeavoured to display was a life with God at the centre, but on the whole it was still a display. As I mentioned in part one this is called ‘masking.’ I still was missing the point of finding my true identity in Christ.

The years passed, I got a job, got a mortgage and got married, although I was only the real me around a select few. It was only in 2011 onwards did I start getting further hints from people, one a fellow Christian who I worked with and had a lot of knowledge about neuro-diversity – he suspected something when I gave an exceptionally detailed talk at work about war memorials (I was working in an architects practice at the time). Even my wife seemed to be dropping hints and all of them were bouncing off me like so many handfuls of dried peas off a tank!

It was only when as a train driver I went into a bookshop at Waterloo Station for a browse and picked up a copy of The Curious Incident of the Dog in the Night-time and started reading did it hit me like a ton of bricks. In the first few pages I read word for word what my thought processes were like. I then decided to take an online test – the result was what I thought – autistic! I then made a doctor’s appointment – I got terribly tongue tied and embarrassed when I sat with the doctor and tried to articulate what I thought was going on. I finally could hold it back no longer and blurted out ‘I think I have Asperger’s Syndrome.’

The reply was ‘Yes, I thought so, you exhibit the classic traits. I trained in psychology.’

I was duly referred for a series of assessments and diagnosed in November 2016. The problem is (and this is not just in the UK) there is precious little support for late diagnosed autistics. In my case I was given a list of books to read at my leisure but as I’d learnt to deal with it for 47yrs there shouldn’t be any problems? This is not the case; in truth I am only now slowly discovering what makes me a child of God with autism.

This slow learning process is, and has over time, made me look afresh at what Paul says in 1 Corinthians 12 about a body with many and I feel that we have a long way to go in embracing authentic Godly diversity in the church. People (not just those who are neuro-diverse) should not feel or be made to feel that they have little or nothing to contribute to God’s work. For me personally, I have had to push myself to do things I believe that God wants me to do (this blog being one of them and this part has been particularly difficult to write) and to keep going despite negative experiences and to dwell on those things that are positive, even to the point of writing a list of what I am and what I am not.

God still loves me just the same as everyone else, I don’t have to pretend any longer with Him, when I feel battered and burnt out – He understands, when I just need that all too precious time alone to recharge away from everything, He knows because He did it on this earth. I don’t have to put on the ‘Being Holy’ mask for church or be fluent in Christianese for the benefit of the wider family of God. I can be funny, I can be happy, I can be upset and angry. As one friend told me ‘I am not much at best, but I am best when I am myself.’ That was said to me well over twenty years ago and it has taken that long or more to travel from hearing to doing.

I have been the only one holding me back, that’s what took me so long.

Popular posts from this blog

Trauma is NOT Linear for Autistics with Alexithymia

January 25, 2022
by Carole Jean Whittington, January 25, 2022 A large part of #lateidentifiedlife is recognizing and processing past trauma.  This is far from a linear process.  There is no direct path from A to Z. Throw alexithymia into the mix and you have a whole other experience on this trauma path.  The delayed realizations that hit you out of what feels like nowhere.  You have one conversation and one phrase or feeling unlocks a cascade of other past experiences and emotions you never noticed before.  All of a sudden past events come flooding in for you to make sense of and process. Days later you are beginning to notice that there were relationships and people who treated you very badly and who hurt you, but you did not realize it at the time.  You were in survival mode as an unidentified autistic.                             ______________________________________________________ Often the fear of rejection dominates our thoughts and we experience that emotional hurt as a deeply physical pain.
Post a Comment
Read more

If you are Autistic & ADHD waking up to a pile of dirty laundry SUCKS! Join me for a HACK to make this easier.

Did You Even Know You Had Been "Masking" for Decades? Autistic Masking and The Picture of Dorian Gray- Reflections on Similarities

February 12, 2021
Chances are your answer is no, just like mine was. In the novel, The Picture of Dorian Gray by Oscar Wilde, the main character, Dorian, lives two very different lives in physical reflection.  One life is his outer body which remains young and attractive, and the other is his portrait which ages and reflects all the external happenings instead of his actual outward appearance.  Dorian remains young and handsome on the outside, while his portrait does not. I don't compare this in the strictest sense, but rather as a way to convey how I perceive autistic masking and how it manifests in both the physical exterior and the internal worlds of an individual. I didn't even know what Autistic Masking was even after the first few years of knowing I was autistic.  It is a term that you learn and become familiar with after you get into the autistic community. The definition of "Social Masking" as it is discussed in the psychology and Autism world is: Masking  is a process in w
Post a Comment
Read more